I’m not sure how unusual tools find me, but another has landed on my lap. This time it was an odd-looking drill press. I spotted it in a local antique shop and knew it was some sort of drill press with its flywheel and depth handle, but it was a drill press like I had never seen before. I could tell it was for drilling through pipe because of the claw like clamping pads that could wrap around pipe after adjusting the bottom arm.

I brought the drill press home and after cleaning it up, I clamped one of my bar clamps across my workbench and attached the press to one end of the pipe.

After studying the press a little bit, it dawned on me that I actually clamped the drill press upside down. The arm clamps down on top of the pipe, then the user turns the flywheel while pulling up the depth adjustment arm drilling a hole.

I realized it was upside down because of a small level on the bottom of the press which guides the user to place the tool level.

Here’s another view of the press in its rightful state.

Luckily, there was a maker’s plate on the back. The tool was made by The Skinner Irrigation Co in Troy, OH. I googled the company name and found they were a turn of the century company that specialized in laying irrigation systems. Apparently this tool was used to tap into pipes to attach some sort of nozzles in a direct line with each other. Also, on the plate there was a patent number 893667 so I googled that as well. I found out that the tool was patented July, 21, 1908. You can read about it here. http://www.freepatentsonline.com/0893667.pdf\

The bit that came with the tool looks like a broken threaded tap. You can see that the collar doesn’t have a chuck so this must be a very specialized tool to do one specific job. 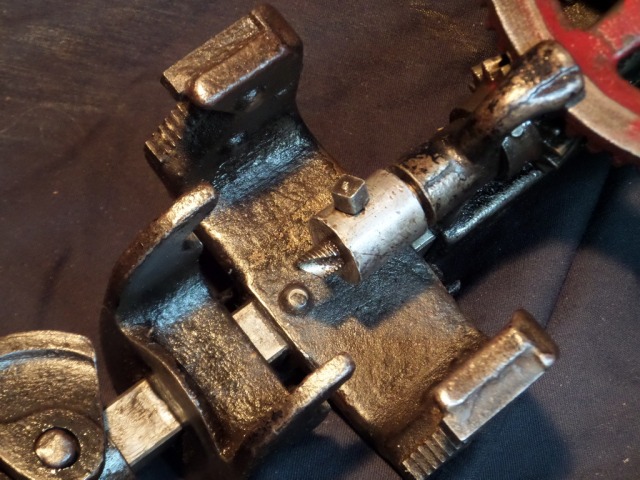 Who knows how many of these hand drilling devices were made, but I’m glad this one found me.