Over the past few weekends, Anita and I have been busy updating our spare bedroom. We use the room as our home office but even that is a stretch since the only thing in there is our printer and WIFI cable box. We don’t even have a desk in the room so it’s been more of a holding area for the antiques she sells online and a table for packaging things up to ship.

She got tired of the drabby feel of the room and wanted to give it some style so she asked me if I could cut up some wood for board and batten trim work. I went out and bought two sheets of 1/4″ mdf and ripped 4″ wide slats for the top of the trim. We nailed the top boards about 5 feet from the floor.

Next I ripped 3″ wide slats and nailed two of them next to eachother in all four corners of the room. I knew the fit in the middle wasn’t going to be perfect due to the bow of the wall so, the gap in the middle was going to have to be filled with caulk.

Playing around with painters tape, we calculated the spacing in between the slats. We took the measurement between the two slats in the corner, minus the 3″ per slat and divided by the number of slats we wanted on the wall. It took a little bit of time to figure out how many slats per wall looked the best, but in the end, the slats on each wall were around 18″-22″ apart. Obviously, each wall had it’s own measurement so no two walls were the same. On a couple of walls, we had to fudge number a little bit so that the slat would miss an electrical outlet but, your eye will never see the difference.

After the slats were nailed up, I ripped some pine 1/2″ thick x 3/4″ wide and nailed a ledge on top of the top board. This finished off the trim with a nice clean look. We played around with molding at Home Depot trying to determine which molding would look the best, but in the end, simpler was better.

Once all the nail holes were filled, everything was lightly sanded. Then Anita caulked and painted the bottom of the walls an off white color.

She decided on a color called Carbon Copy for the top and applied a couple coats to the top side of the wall. The room has a lot more style now and it only took about $200 in material and paint to do. Now we finally have an office that looks like an office, except we still don’t have a desk or any other office furniture.

The windows in our house aren’t much to talk about. Just 36″ square vinyl windows in a typical ranch. I’m not sure how old they are as I know they aren’t original to the house, but were here when I bought it fifteen years ago. My wife, Anita, wanted to jazz them up a bit and give them some character, so she asked me to make trim to go around them.

The first thing we did, was to take out the marble sill, which was the hardest part. Sometimes they get stuck inside the frame, so I had brake them apart in order for them to come loose. If I was lucky, I could cut the sealant around the sill and jimmy it loose.

I made a new sill out of 7/8″ thick maple. I tried to get rift sawn material so it wouldn’t warp too bad. I cut notches on both sides of the sill so it would stick out on the wall so the 1×4’s could lay on top of it. 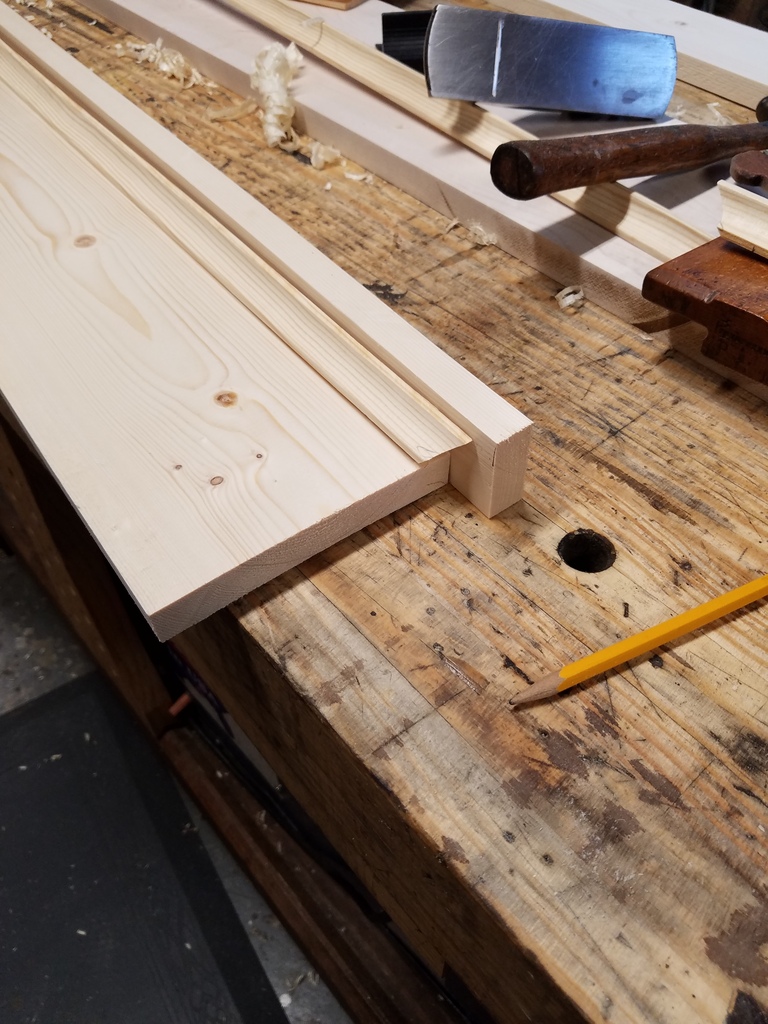 We wanted the header to have character so we took a 1×6 of pine and attached a 1×2 on the top. We then laid a cove molding on the 1×6.

Using my small miter box, I was able to cut the tiny pieces of cove for the ends. 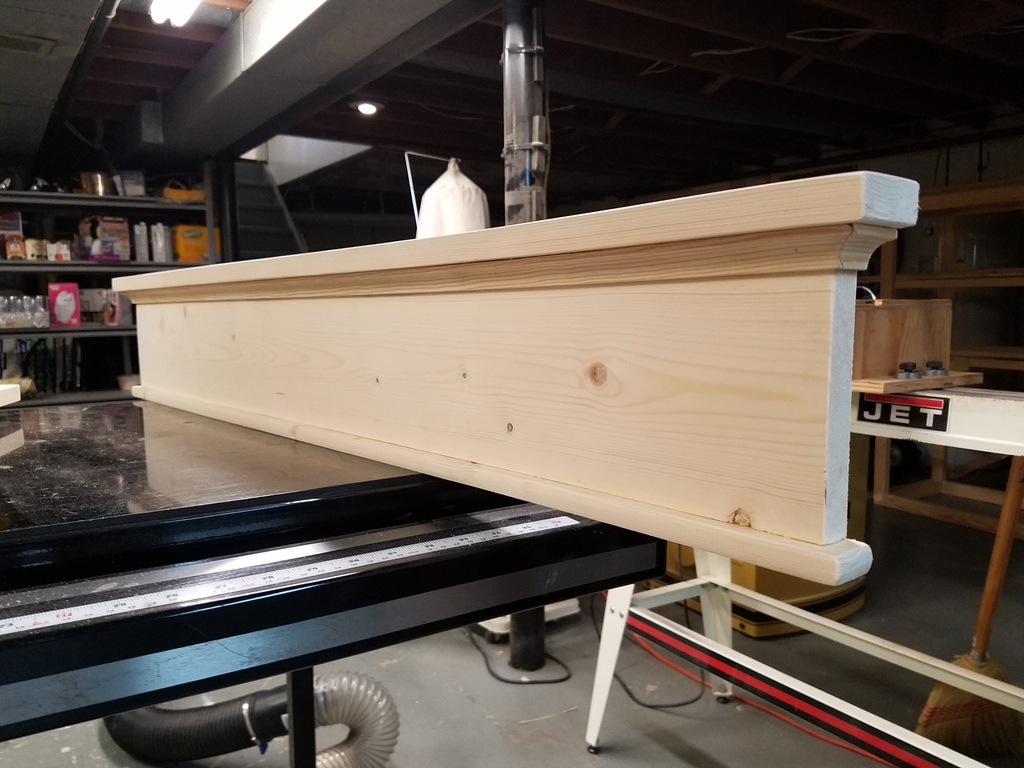 I then took a piece of pine 1/2″ thick and used my block plane to shape the corners and ends to create a bullnose. I pinned everything together  with my 18 gauge pneumatic nailer to complete the header.

Back at the window, I measured, cut, and nailed the rest of the pieces to the wall using a 15 gauge finish nailer. I trimmed the maple sill so that there would be a 3/4″ overhang to sides on both ends. 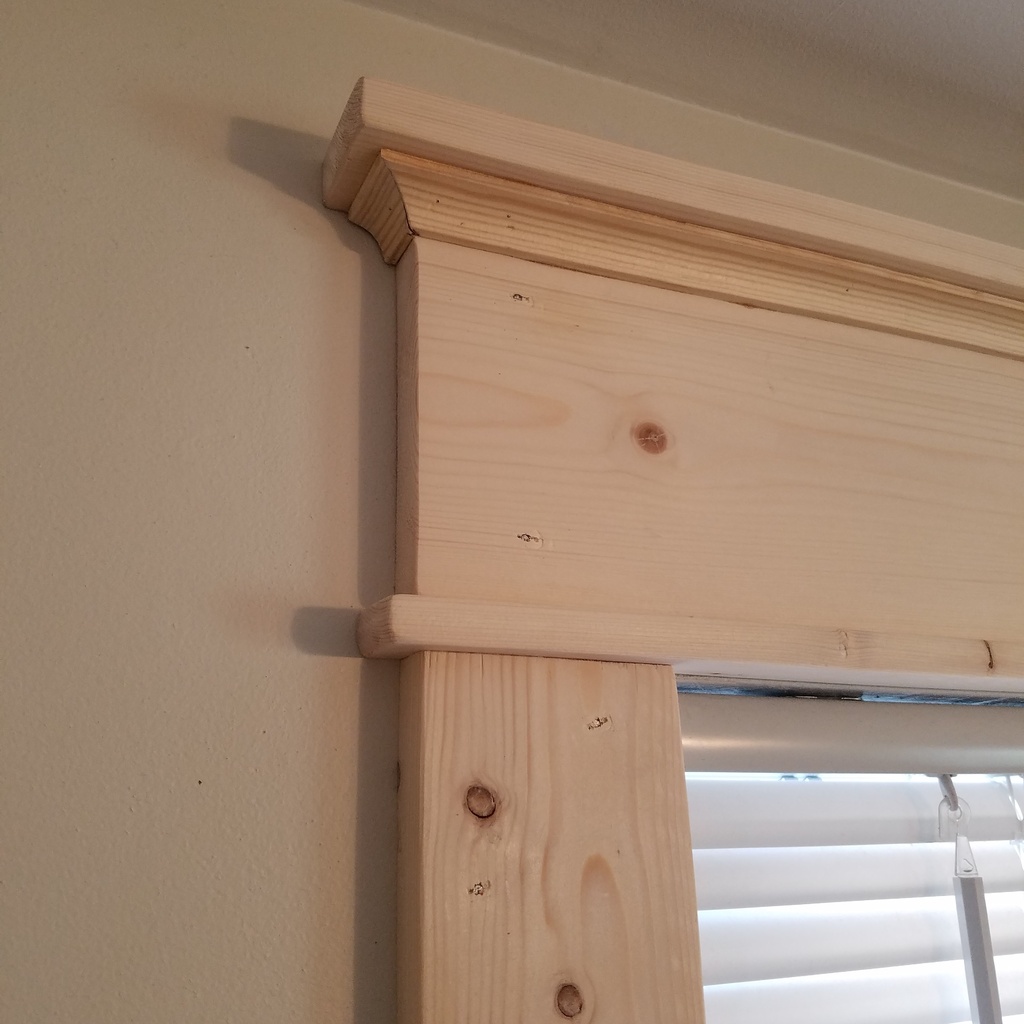 Here’s the close up of the header nailed to the wall. The 1/2″ thick bullnose hangs over 1/2″ on both sides of the frame.

After filling the nail holes with putty, Anita caulked, primed, and painted the window trim. We did both windows in our bedroom the same way. The next step is to frame around the closet, paint the room, get a new headboard, new blinds, ceiling fan, rug, etc… I don’t know, ask Anita, she’s the designer. haha

The Empire dresser is officially done. My wife Anita found some nice oil rubbed bronze drawer pulls on the internet after looking locally for some with no luck. It originally had glass knobs on it, but a few of them were in rough shape and not all of them matched. I think the drawer pulls she picked out look really nice and add to the character of the piece. She applied four to five coats of hemp oil to the dresser. It gives it a warm aged look without making it look too glossy.

I put a few hours in this as well. I had to strip all the old stain off, patch a veneer job, re-band all the drawer fronts with sapele, replace a brass key escutcheon, and reinforce some of the drawer bottoms with pieces of poplar.

She plans on selling this in her booth with her painted furniture and antiques this Saturday at a local street fair in Milford, OH called the Longstone Festival. She was lucky enough to get a booth as there is usually a waiting list every year. Hopefully it will sell there. I will let you know if it does. http://www.longstonestreetfestival.com/

Arsenal of Transitional Planes tuned and ready for work.