If you know me, then you know I don’t do woodworking for a living. I’m actually a sales rep for one of the largest building manufacturers in the country. I sell patio block, mulch, and concrete mix to Lowe’s and Home Depot’s in the Cincinnati, Dayton area. Unfortunately, I got hurt at work. 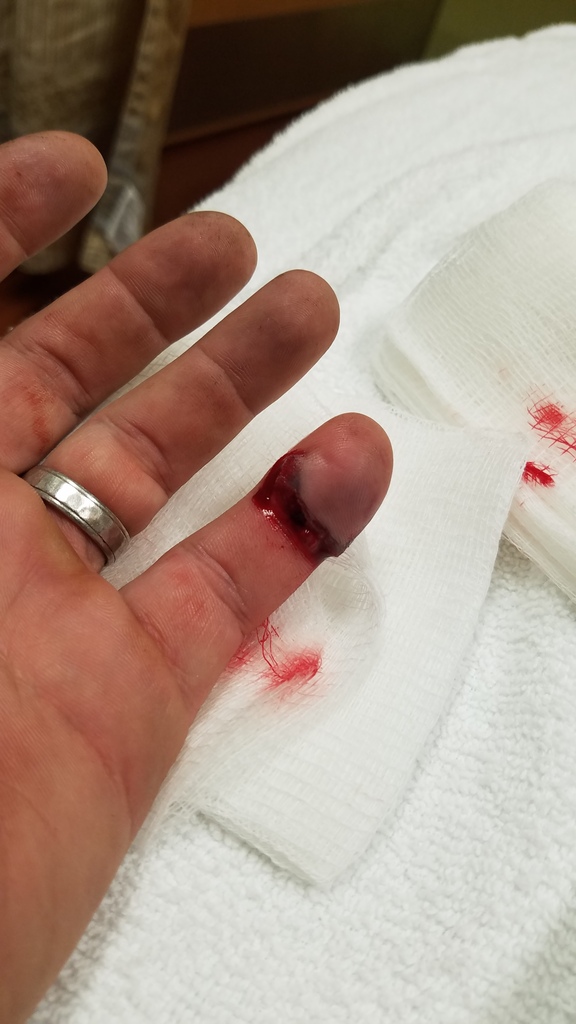 Part of my job is to get my stores ready for spring by making patio hardscape displays on the shelves of the garden department. While in one of my Home Depot’s, I removed the old display and had to put a shelf in its place. In order to get the beam locked in place, I had to hammer it down so that the little nibs would lock in the hole properly. I got the right side of the beam hammered in place, when I was working on the left side. Being right-handed, I was using my left hand to hold the beam against the rack pushing it forward while swinging a 3 lb hammer with my right arm. Just as luck would have it, hammering across my body, I barely nicked my pinky finger with the end of the hammer. Had I not been swinging so hard, it would have just caused a blood blister, but because I was wailing at the beam with such force, the blow blew the tip of my pinky open. As soon as I felt it, I knew it wasn’t good, but I didn’t know how bad the cut was until I went to the bathroom to clean it up. Once there, I realized I had to go get stitches as I could I open up the top of my pinky finger.

I traveled to a nearby hospital where they put five stitches in my finger. I also found out through x-rays that I broke my bone as well. I have to wear a splint for the next month. I always thought that if I ever cut one of my fingers open, it would be from a band saw blade,  chisel, or a knife. I never thought it would be from the brute force of a 3lb drilling hammer.

The stitches came out last week and I should be fine in about a  month. I’ll need to keep the splint on my finger as the bone heals, but it’s not a big deal. The protrusion of the splint from the top of my finger keeps me from hitting my pinky on objects. I take off the bandage everyday and clean the wound. You can see how much my finger has swelled from the blow. I feel stupid for hitting my finger, but it was more of an accident than anything.

2 thoughts on “The Damaged Pinky”

I found the rare curved Stanley No 397 Surform File this weekend in the wild. I wonder what they were used for. My guess is for pattermaking. No way would you file the concavity of a windsor chair with this thing IMHO.