I bought this table last year at a flea market for $4.00. Missing the drawer, the guy selling it considered throwing the table away as he thought it wasn’t worth much. At the last minute, he decided to bring it to the flea market and see if anyone would buy it. Well I guess I was the sucker because I whipped open my wallet and handed him four crisp one dollar bills for it.

I’m not quite sure if the table was built with the two bins in it or if it was retrofitted later on with them. In any event, I decided to keep them and see if I could bring the table back to life. 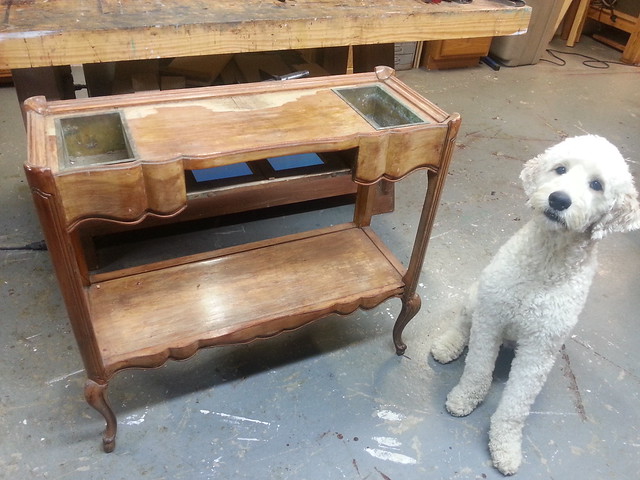 Other than missing a drawer, the real big problem with the table was that there was a piece missing off the front near the leg where the dowel joints failed. I shaved away the roughness of the front with a rasp so that I could attach a new piece of wood to it. 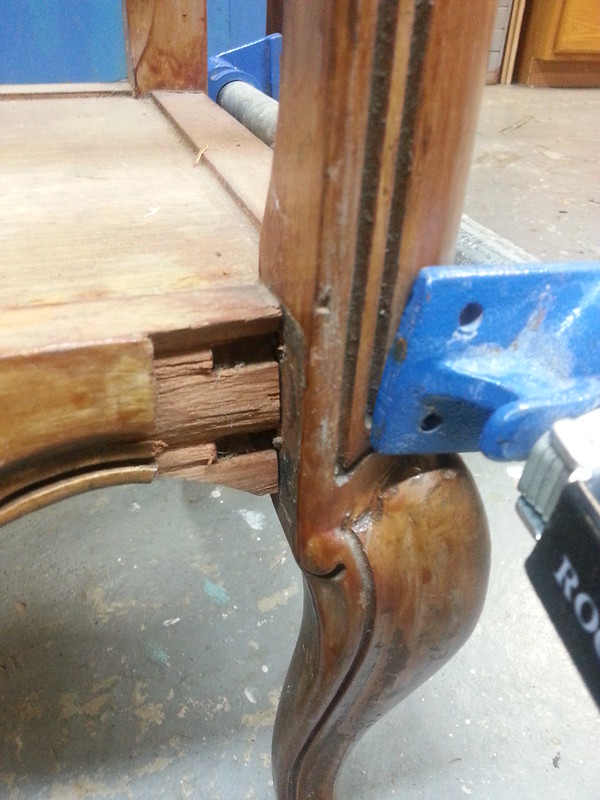 Once I carved out a new piece out of poplar, I glued everything together. I’m by no means a carver, but I was satisfied with the end result. I knew the table would eventually be painted so it wasn’t a big deal if the moldings didn’t match up perfectly. 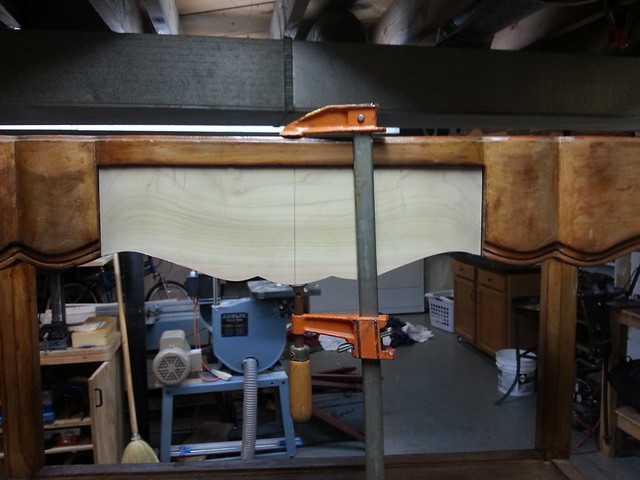 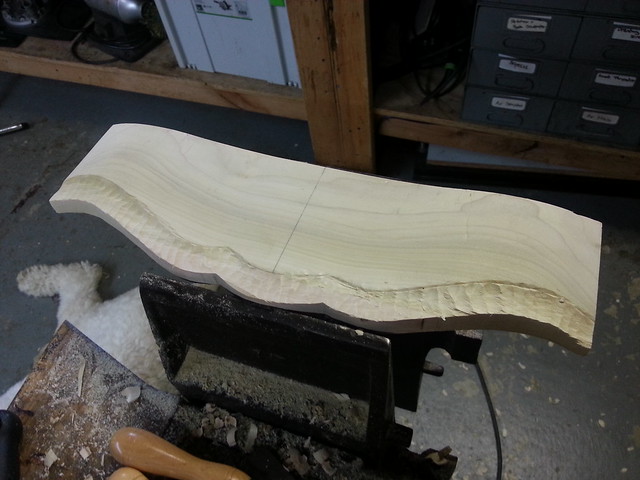 Deciding how to attach the drawer front to the sides of the drawer, I opted to simply use a stopped rabbet joint and pin the sides to the front. I considered using a router bit and my router table to cut the stopped rabbets, but I figured I could cut them by hand just a s quick. I used my marking knife and scored the fibers of the wood where I wanted the rabbet to be. Then I very carefully pared away the wood with a chisel. Once I got so deep, it became easier to remove the waste without damaging the drawer front. It was very similar to chopping out the waste on the side of a tenon. 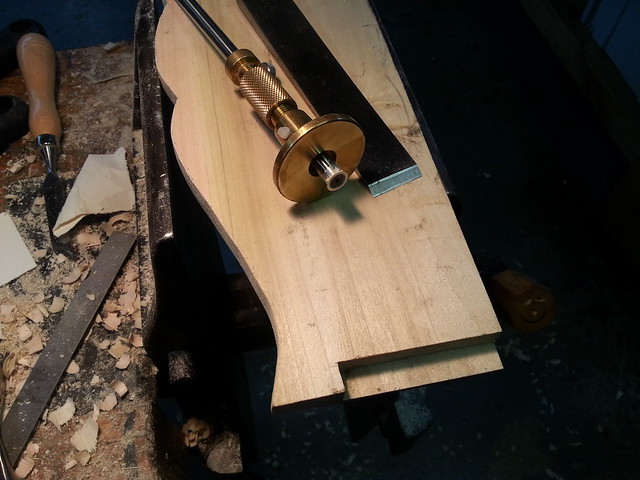 The drawer was built using 1/2″ poplar and 1/4″ plywood for the bottom. The biggest deal with making a drawer is making sure the thing is square. Having a drawer shaped like a rhombus is just asking for trouble. 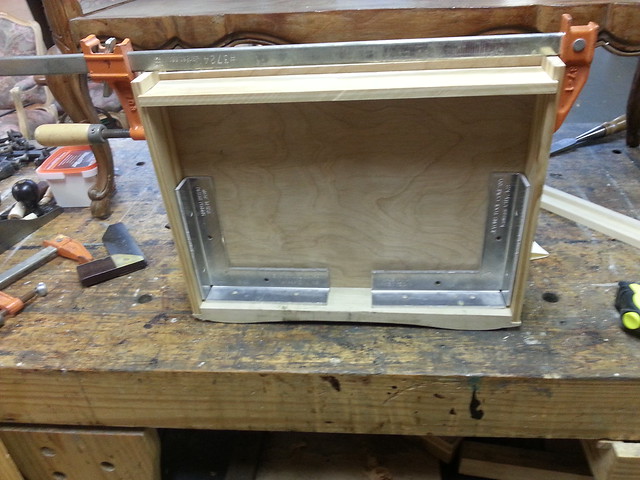 The running stick was still in the table so I had to make a new runner for it. Whipping one up on the table saw and fastening to the table was no big deal. In order for the drawer to run properly, I used double stick tape and fastened to the runner to make sure it was in the right spot. Once the drawer fitted perfectly, I glued the runner to the bottom of the drawer.

A few hours in the shop and the new drawer fits nicely in the table. 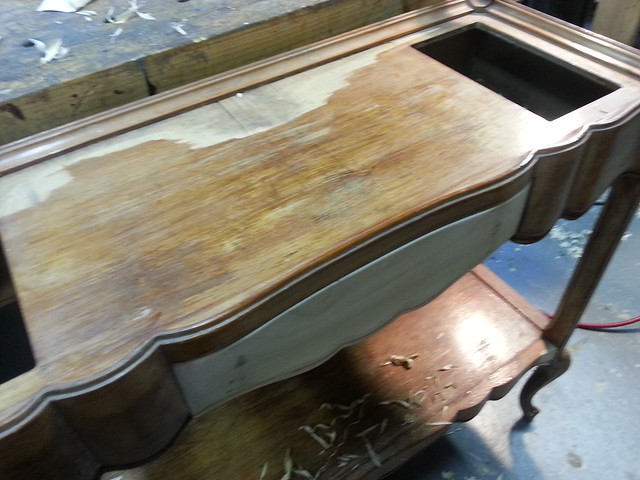 The table had some water damage to the top which caused the veneer to chip and break away. Making a new top for the table didn’t appeal to me, so I tried and out-of-the-box approach. I mixed up a batch of auto body filler and spread it over the top where it was missing the veneer and left it to dry. 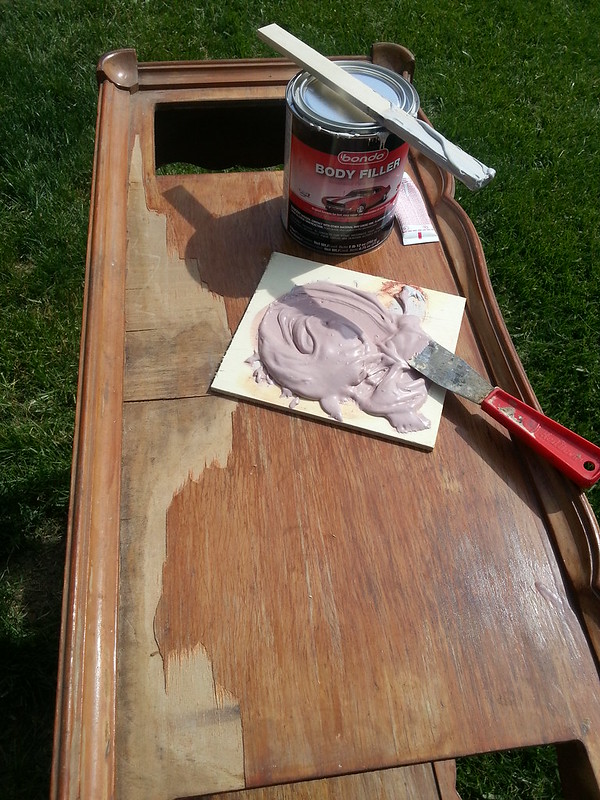 I did this step outside because the body filler stinks to high heaven. After the Bondo dried, I sanded the high spots with 80 and 150 grit sandpaper.

Here’s the finished table with a few coats of paint. My wife Anita painted it and sanded through the coats to give the table a worn look. I don’t think the table turned out too shabby considering I only paid $4.00 for it.